COVID-19 UPDATE: We remain committed to providing our patients the highest level of care. If you have an upcoming visit at our office and have traveled outside your state of residence and you are currently experiencing symptoms of fever, cough or difficult

Radiofrequency ablation (RF Ablation or RFA) is a medical procedure in which part of the electrical conduction system of the heart, tumor or other dysfunctional tissue is ablated using the heat generated from medium frequency alternating current (in the range of 350–500 kHz). RFA is generally conducted in the outpatient setting, using either local anesthetics or conscious sedation anesthesia. When it is delivered via catheter, it is called radiofrequency catheter ablation.

Two important advantages of radio frequency current (over previously used low frequency AC or pulses of DC) are that it does not directly stimulate nerves or heart muscle and therefore can often be used without the need for general anesthetic, and that it is very specific for treating the desired tissue without significant collateral damage.

Documented benefits have led to RFA becoming widely used during the 21st century. RFA procedures are performed under image guidance (such as X-ray screening, CT scan or ultrasound) by an interventional pain specialist (such as an anesthesiologist), interventional radiologist, otolaryngologists, a gastrointestinal or surgical endoscopist, or a cardiac electrophysiologist, a subspecialty of cardiologists.

RFA, or rhizotomy, is sometimes used to treat severe chronic pain in the lower (lumbar) back, where radio frequency waves are used to produce heat on specifically identified nerves surrounding the facet joints on either side of the lumbar spine. By generating heat around the nerve, the nerve gets ablated thus destroying its ability to transmit signals to the brain. The nerves to be ablated are identified through injections of local anesthesia (such as lidocaine) prior to the RFA procedure. If the local anesthesia injections provide temporary pain relief, then RFA is performed on the nerve(s) that responded well to the injections. RFA is a minimally invasive procedure which can usually be done in day-surgery clinics, going home shortly after completion of the procedure. The person is awake during the procedure, so risks associated with general anesthesia are avoided. An intravenous line may be inserted so that mild sedatives can be administered.

In April 2017, the US Food and Drug Administration approved a commercial device using cooled radiofrequency ablation, with effects lasting for up to a year of pain relief from knee arthritis.A review of preliminary clinical research indicated that better efficacy of ablation for knee pain was achieved by targeting the genicular nerve (one of the articular branches of the tibial nerve), targeting larger nerves including the femoral nerve, or by using an intra-articular procedure.

Whether for back or knee pain, a drawback for this procedure is that nerves recover function over time, so the pain relief achieved lasts only temporarily (3–15 months) in most people. 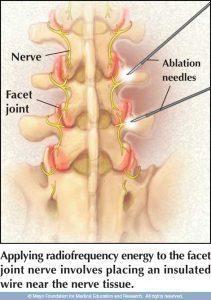 Telehealth: The Advantages of Telemedicine

Struggles to get to the clinic? Trying to reduce your exposure to COVID-19, as well as other contagious illnesses, and still need to see your doctor? Telehealth is safe and easy — receive quality care from anywhere.

Vagus Nerve Stimulation Vagus nerve stimulation (VNS) is a medical treatment that involves delivering electrical impulses to the vagus nerve. It is used as an add-on treatment for certain types of intractable epilepsy and treatment-resistant depression.

Electromyography-(EMG) Electromyography (EMG) is an electrodiagnostic medicine technique for evaluating and recording the electrical activity produced by skeletal muscles. EMG is performed using an instrument called an electromyograph to produce...